Since the first Maverick Catlyn was built, I have always wanted to sail
one. I got to know the owners, Johan and Marlene van Niekerk of Catlyn well
and we became good friends. They sailed the world for four years and by
chance we crossed paths in St.Helena and a few years later again in
Tortola. Their blog was and still is a huge source of inspiration for
anyone who wants to sail with their family. Colourful and excellently
written and well worth checking out. Down the line I have met a few other
owners of Maverick catamarans. Catarina owned by long time friend Paul
Rackstraw from Cape Town and Our Rose, Rich and Jennifer from New Zealand
who I met briefly in Langebaan. Island Home, owned by Geoff and Marina
Jansen from Australia is hull nr 12. Mavericks are built in Cape Town by
Master Boat Builder Rudi Pretorius, not mass produced, but custom built to
the owners specifications. It is truly a catamaran in a class of its own, the
use of space unlike anything I have ever seen .All the space creating and space
saving ideas on the Maverick is something to marvel at. Aptly named the Space
Craft, they stand out in any marina or boatshow. Check Maverick Yachts out on
google and you will see what I mean. Was wondering last night about boat nr
13 :) This morning it was confirmed that there will be hull nr 14A and 14B. No
hull no 13.

Before I could really comment on how the Maverick performs under sail, we
first had to experience different types of weather. And that we had. From
strong winds from behind all the way round to strong winds from ahead, she
felt steady as a rock. For 36 hours we had rising seas as we were beating
into the wind. Up to 40 kts of north easterlies and waves of up to 5 meters,
we made steady progress. On the beam she was also much faster than I
anticipated. And vibration from the motors when we are motoring is really
minimal. On board we have Geoff and Marina Jansen, two kids, Phil and Scott,
a fourth crewmember Jasmijn who flew in from the Netherlands a few days
before departure and myself.

We departed from Cape Town on 26 August and on advice we took shelter in
Struisbaai. The inner harbour had a few mooring bouys and we tied up to one
that was recommended by the locals. Geoff was in the engine room and I was
busy doing some dishes when we heard someone whistling at us, just in time to
see that the mooring bouy has become undone and we were drifting quite fast
towards a rocky shore. Just in time we managed to start the motors and get
out of harms way. Found another mooring bouy and this time we stayed secure.
It was close to new moon and spring tides and at about 9pm our sacrificial
keels starting touching the bottom. Not a nice feeling, fortunately it was
soft muddy sand that we were in. We read the recommendations for Struisbaai
again and realized we should have anchored outside the harbour. The next
morning early we were up, the tides was up, and we motored out and around to
a safe anchorage. The expected front was starting to come through and soon we
had winds in the high 40's blowing over us. Fine hail, rain, thunder and
lightning, it was a spectacular show. We sat at anchor until the storm
abated and made way for Port Elizabeth.

The expected headwinds came through earlier and we had to run into Mosselbay
for shelter. The marina manager Schalk, went out of his way to create some
space for us in the marina. We shifted another boat, tied our stern onto the
dock, and ran long lines which we attached to strongholds on the shore. We
could have been out at anchor, but were quite comfortably nested in the
marina. Mosselbay and PE is known for sometimes big swell running into the
harbour, but all in all, we were properly secured. We also plugged in shore
power and had access to fresh water as well. Johan and Marlene from Catlyn
invited us for a braai, and we accepted gratefully. Also a bit of nostalgia
for Johan and Marlene who sold there yacht a while ago to step aboard the
newest Maverick and also meet the newest members of the Maverick family. We
had a most awesome time with the van Niekerk family on their farm and many
tales of their adventures were shared. We also met some of their friends.

A lifelong wish I had also came true for me during this period. Since I could
remember, I always wanted to see Paris and Knysna. Now I have been to places
all over the globe and sailed most of the oceans and seas as well. More than
eight times around the globe I've sailed if I count my nautical miles. And
until a few days ago, I have never been to Knysna. The van Niekerk family
went way out of their way to fetch me the next day again and showed me a bit
of Knysna. We also had lunch with 1st Mate Malcolm who have done 5 long
distance deliveries with me before. He has been living in Knysna for many
years, and after lunch he took me to some of his favorite spots. Knysna, I
will be back, and soon :). Malcolm drove me back to Mosselbay that afternoon
as we were ready to depart for Mauritius the next day.

The weather predicted was light north easterlies turning north which was
perfect for us to cross the mighty Benguala current. The South African coast
is considered the most dangerous in the world, and at the wrong time, waves
of up to 40 meters will swallow you alive. These are just words, the reality
is unimaginable. Once again, google it and you will see even big ships
flounder if they get caught out in these waters. So timing your crossing is
essential. At first the north easterlies was pushing us down south into the
Southern Ocean. We went over 36 degress south before the wind turned north
and we could start figting our way east. Winds of over 40 knots made it
difficult for us and we were slowly getting pushed further down south, but at
least also making good progress east. Big swells and strong seas came through
at about 10pm, some waves crashing right over us. I decided to stay on watch
from 11pm till 6am the next morning to make sure that we are safe. It was a
rough night for everybody, but once again I realized that it will change,
eventually. Staying calm but super alert is quite taxing on these long night
watches. You see the white foam of a breaking wave ahead of you. The boat
climbs and climbs up the wave, and drops down the other side. The trick is
set your sails and control your speed to try for a soft landing on the other
side. Having a third reef in the mainsail is a huge blessing under these
conditions. Most boats only have a second reef and very difficult to balance
the boat properly under such extreme conditions. I can unequivocally say that
the Maverick is a blue water sail boat through and through.

Interesting how the seastate changes as the wind starts backing. Weather
predicted is westerlies from behind, and swell too. Fair winds and following
seas, at last. The north easterly winds starting backing to north, then north
west, and finally the westerlies started coming through. The cirrus clouds were
messengers warning us of strong weather coming in with the front moving over.
Slowly the swell changed direction. A bit lumpy as sea is still not settled,
but soon she will be, and we will be surfing down the waves. We are eating
exceedingly well on board, and I love the coffee machine with little pods of
coffee that fits in the coffee machine. It warms the water, warms and froths
the milk, and in under a minute you have coffee of the first order.

Good to be out here on the big blue again, and good to be on a Maverick.

Till next time, cheers
Posted by Pro Yacht Deliveries at 4:00 PM

Leopard 50 on the run 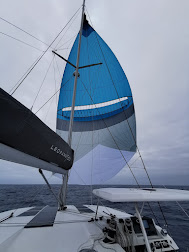 Pro Yacht Deliveries
Cape Town, Western Cape, South Africa
I specialize in delivering catamarans to and from destinations world wide. Especially with owners who wants to learn how to sail and get to know their boat before they take on the Big Blue. I have logged over 270,000 nautical miles and enjoy every moment as much as the first time.